Thank you. Thank YOU. THANK you.
The inaugural Whole Hog Halloween show at Valentines was an unqualified, unreasonable success. We’re so happy you could join us and witness terrifying visions like the Pistolwhips of the United States of America, the Wizard of Skaz, Captain Ahab stomping his peg leg on a trunk lid and the return of the Hellasexuals. While most of the bands are hitting the No Pepper stage at least one more time before the bitter end, it was a rather excellent way to say one last big, stupid, drunken goodbye to a venue that most of us have been frequenting for over a decade. Valentines forever.

Here’s some photographic evidence of things getting just a little weird, courtesy of Goldtooth’s Matt Ferguson: 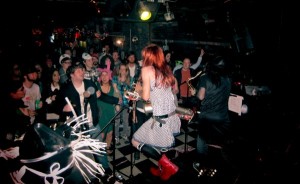 In other Built4BBQ news, tracking for the long-awaited Henry’s Rifle LP is finally under way. John’s kicked out a couple solo jams already, and full band recording starts up soon. This one’s gonna be something else entirely – stay tuned for more updates.

Next up on the show calendar, everyone’s favorite midwestern punk rock tunesmiths THE SLOW DEATH return to Valentines on Friday, November 15, with The Slaughterhouse Chorus and local party animals Drew & the Grand Spectacular and Boxer Brown in tow. If you like bands like Dillinger Four, the Replacements and the Lawrence Arms, the new Slow Death record will probably be the best purchase you make this year. If you like things like fun, rock music and good people, this show will probably be a worthy $5 investment as well. Also of note: this will almost definitely be the very last Built4BBQ production at 17 New Scotland Avenue. I’m getting depressed just typing that sentence. But hey, check out this bitchin’ show poster from the mind of Henry’s Rifle himself: 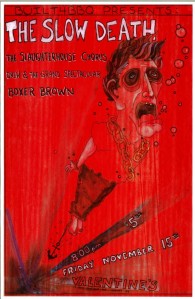 More killer shows on tap for November and December across the board… check the calendar and stay with it.
And hey – we’ve got Built4BBQ stickers back in stock and more cool stuff on the way. Keep an eye on that swag page and support your local BBQ.