We’re psyched to present the very first Built4BBQ production at our new home away from home, The Low Beat, on Thursday, May 1! Our favorite downstaters, The End Men, make their triumphant return to the area with a new album in hand! That’s right – this is the Albany release show for the gruesome twosome’s new “Odds & Ends” EP, and we can just about guarantee that it’ll be one of the finest slabs of recorded music you’ll hear all year. This monster rock ‘n’ roll bill also features the mighty Charmboy and a rare appearance by the Slaughterhouse Chorus, who are spending most of 2014 holed up underground working on a new album. Still not convinced that this is the best way to spend $5 on a Thursday night? Check out this poster, straight from the mind of Henry’s Rifle. 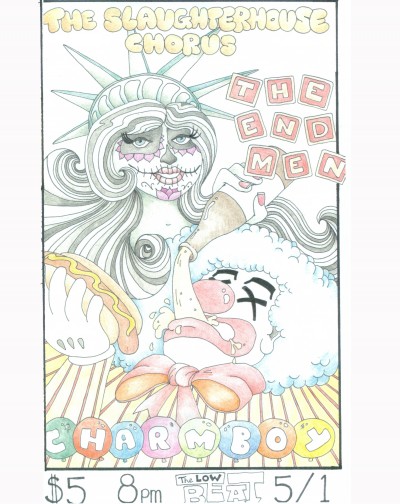 Yeah, we’ve got you now. Here’s the Facebook event.

But wait, there’s more! Saturday, April 26, is gonna be a hell of a day for local music.
Exhibit a: MOVE Music Fest takes over downtown! This is your first chance to catch Linear North with Henry’s Rifle on the “skins”, pounding Red Square into submission at 4pm. More MOVE appearances we think you’ll appreciate: The Slaughterhouse Chorus, 10pm at the Barrel Saloon; Party Boat, 9pm at McGeary’s; The So So Glos, 11:30pm at Red Square; and American Pinup, midnight at Stout!
Exhibit b: Down on the Corner #1 at Pauly’s Hotel & The Low Beat! A whole bunch of bands on two stages for one low price: New Red Scare (now featuring Built4BBQ’s busiest guitarplayer, Dan Wilson of Pistolwhips/Kimono Dragons/Mr. Toad’s fame), The Lucky Jukebox Brigade, M.R. Poulopoulos and more!

A whole lot more great stuff is coming up quick, from killer shows to new records to the long-awaited release of Built4BBQ Sampler #2. Stay tuned!